Skip to content
HomeThe mystery of the cigarette pack

A few weeks ago, I was out on my early morning walk and I noticed a pack of cigarettes sitting in a newspaper mailbox.  The cigarette pack was about an inch from the end of the mailbox, and my overactive mind felt forced to come up with an explanation.

My first thought, having been a smoking teenager myself many decades ago, was as follows.   One teenage friend must have left the cigarette box there for another friend, who lived in the neighborhood.  There were probably a few cigarettes left in the box, and the second friend was going to come by later in the day and pick them up.  Both were hiding their habit from their parents and figured they’d never get caught since the family of the person leaving the cigarettes didn’t subscribe to the newspaper.  One friend was leaving a gift for another.

And then I promptly forgot about the cigarette box. 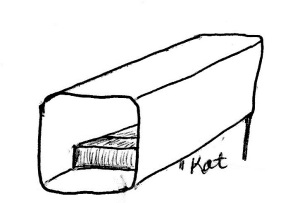 Until a few days later when I passed it again, and the box was still in the same spot, facing the same way; obviously untouched.  “Hmmm,” I thought, “I wonder why the cigarettes are still there?”  And then, I theorized, perhaps the box was empty and was left as a signal.   A young man asked a young woman out on a date, and she wasn’t sure if she wanted to go.  She had a brilliant idea to leave a signal.  “If you see the cigarettes in the mailbox, that means my answer is yes, and I’ll meet you Friday night at ‘our’ spot.”   She wanted to add some intrigue to the dating process and the cigarette box was a signal of romance.

I continued on my jog, promptly forgetting about the cigarette box.

Until a week later when I passed it again, and the box was still in the same spot, facing the same way; still so obviously untouched.   Oh my.

It’s been two weeks and the cigarette pack remains in the newspaper box.  Whatever could it mean?